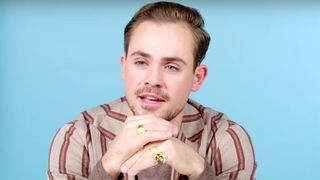 Australian actor Dacre Montgomery, more widely known as Billy Hargrove in Stranger Things, recently participated in GQ’s “10 Things I Can’t Live Without” segment. While he can often be seen in a jean jacket or his lifeguard uniform, as well as driving his ’79 Camaro in the show, Dacre’s travel essentials seemingly stray from the Stranger Things character portrayal that has recently catapulted him to stardom.

Montgomery’s must-haves range from multiple pairs of sunglasses to various jewelry and a series of grooming products. He reveals that his preferred fragrance is by none other than Tom Ford, before showcasing his beloved Saint Christopher necklace that he actually managed to wear in Stranger Things.

For a detailed look at 10 items Dacre Montgomery can’t live without, press play above. And in case you’ve been living under a rock recently, you can catch him in Stranger Things 3 streaming now on Netflix.