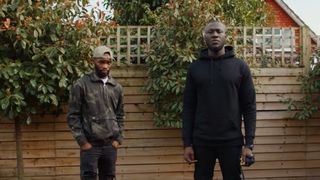 Following on from his 2017 EP Game Over, the English rapper surprised fans with the news that he will release his first studio album on March 8. He previewed the album with the single “Black” on February 21, and the shortly after dropped the accompanying video. Watch it above.

Directed by Nathan James Tettey and Edem Wornoo, “Black” was shot in England and Nigeria, and is described as “a profound exploration of black identity, excellence and the diaspora.”

Dave was the second artist ever (after Drake) to debut a track at number 1 in the UK last year, with his single “Funky Friday,” featuring Fredo.

Check out the artwork for Psychodrama below. The album is available for pre-order now on Dave’s website.

Black, the first release from my debut album Psychodrama, is out now. Pre-order Psychodrama at www.santandave.com