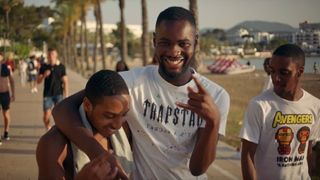 Back in March, Dave tweeted “Picture the scenes. You’re drunk in Ibiza. It’s merky festival and you’ve had a couple cocktails, Hus is free, location is playing, Girls are smiling at you. What a 2019.” His newly released “Location” video is a visual diary of just that.

The Kaylum and Dave-directed visual follows the British rapper as he headlines Stormzy‘s #Merky Festival in Ibiza. Afrofusion powerhouse Burna Boy is along for the ride, linking up with Krept & Konan, Jorja Smith,  Jadon Sancho, and  J Hus.

There was no sign of Alex Mann , the 15-year-old that Dave brought onstage at Glastonbury a few days earlier who subsequently won over the internet with his suspiciously skillful rapping.

Dave dropped his debut studio album PSYCHODRAMA earlier this year. You can read our review here.

This BAPE x Seiko Dive Watch Is Perfect for the Summer Vacation
WatchessponsoredFebruary 7, 2019

New Balance’s “Burnt Orange” 991 Is a Sneaker You Need in Your Rotation
SneakerssponsoredFebruary 11, 2019