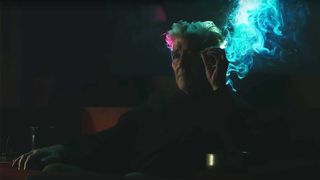 If you’ve ever wanted to crawl inside the mind of David Lynch to find out what makes him tick, then watching this Stella McCartney-helmed profile on (and narrated by) the auteur may be the next best thing.

Curtain’s Up, created by Lynch’s son Austin and Case Simmons, we’re given a glimpse into one of Hollywood’s most enigmatic minds. Throughout the short, Lynch’s face is illuminated by a film’s projection as he discusses why he loves cinema, why ideas are like “catching fish,” and what his creative process is like.

“Cinema is a language. It can say things, big abstract things, and I love that about it,” Lynch’s narration begins. “Some people are poets and have a beautiful way of saying things with words, but cinema is its own language and so you can express a feeling or a thought that can’t be conveyed any other way. It’s a magical medium.”

Do you have a favorite David Lynch project? Share yours in the comments.

Now check out the trailer for Lucas Hedges’ new movie, ‘Ben is Back.’