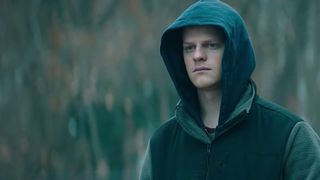 Lucas Hedges stars as the titular Ben in the new teaser trailer for Ben is Back, which just dropped. Be one of the first to check it out above.

Per IndieWire‘s report, the plot will revolve around Hedges’ character, and take the place over a 24-hour time span. When Ben returns home unexpectedly, his family are put to the test as his struggle to stay clean in their boring suburban town is pushed to its limits.

As you’ve probably noticed, Lucas Hedges is everywhere at the moment. After gaining notoriety thanks to roles in Lady Bird, Three Billboards, and Manchester by the Sea, not only will Hedges appear in Ben is Back, but also Jonah Hill’s directorial debut, Mid90s, which will release via A24 in October.

Ben is Back hits theaters December 7. Will you be watching? Let us know in the comment section following.

In other movie news, the first trailer for ‘Suspiria‘ will make your skin crawl.

Netflix’s Disturbing ‘Dark’ Is Coming Back With a Terrifying Second Season
MoviessponsoredApril 26, 2019
What To Read Next
Load More
Search Results
Load More