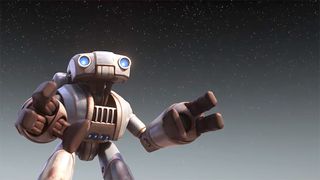 Following the recent release of its last SparkShorts animation, Purl, Disney•Pixar has dropped another politically tinged adventure, Smash and Grab. The eight-minute story follows two proletarian laborer robots and their fight for freedom. Watch above.

After years of daily grind, tethered and working away in the engine room of a train, the robots catch a glimpse of the outside world and the higher class of robots there. Filled with new dreams, the little robots start to rebel against the system and look to make their escape.

Smash and Grab was directed by Brian Larsen (The Iron Giant, Samurai Jack) and produced by David Lally (Inside Out, Coco). Pixar’s new SparkShorts series aims to inject experimental, cultural narratives into the animation studio’s output.