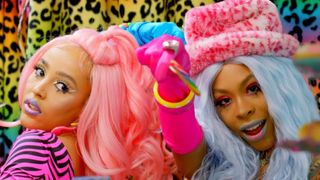 Rico Nasty hasn’t slowed down since she dropped the NASTY mixtape. While she was bringing all that heat, Doja Cat was transitioning to viral fame from her hit single “Mooo!” Today, the breakout artists share a special collaboration called “Tia Tamera” with a music video that ’90s kids were destined to appreciate. Obviously, the title is a reference to the popular Disney Channel sitcom Sister, Sister starring Tia and Tamera Mowry.

Earlier this week, Doja Cat randomly uploaded the song “WAFFLES ARE BETTER THAN PANCAKES” and it speaks for itself. Rico Nasty recently made another rager with Kenny Beats by the name of “Sandy.” If there’s ever a possibility for them to combine their forces on a joint mixtape, we fully support it.

After you watch the fresh visual, revisit our interview with Doja Cat about the story behind her infamous cow anthem. Also, check out Rico Nasty’s episode of Real Talk and read the accompanying profile.