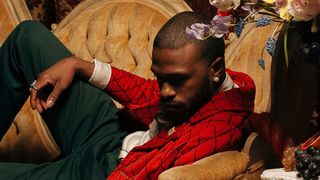 Duckwrth recently dropped his The Falling Man EP which features special guest appearances from Rico Nasty, Allan Kingdom, Terrace Martin, and Kiana Ledé. Following the release of the project, the Los Angeles-based rapper has delivered a striking accompanying short film. The visual touches on the themes of the broader project, specifically the artist’s “fear of falling as quickly as he rises.”

Duckwrth seems to be enjoying a meteoric rise selling out tours with Anderson .Paak and Rich Brian, as well as headlining a handful of them on his own. His music has been featured on Spider-Man: Into the Spider-Verse, Insecure, and Bill Maher to name a few, and as such, the rapper has been steadily evolving into a household name.

Watch the film above and scroll down to stream The Falling Man in full.