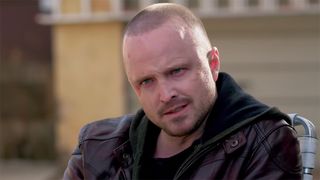 Netflix is scheduled to release the long-awaited Breaking Bad film, officially titled El Camino: A Breaking Bad Movie, tomorrow, October 11. In continued promotion of the picture, the streaming service shares a new behind the scenes video featuring leading actor Aaron Paul, writer/director Vince Gilligan, and others from the cast and crew.

The clip includes short excerpts from the movie, as Paul dishes on his portrayal of Jesse Pinkman, revealing that El Camino is about Jesse’s struggle to survive, as he will stop at nothing to finally be free. Gilligan also dishes on the film by saying that it feels like déjà vu, but also fresh and new at the same time.

Press play above to let Aaron Paul and Vince Gilligan take you behind the scenes of El Camino: A Breaking Bad Movie, which arrives tomorrow, October 11.