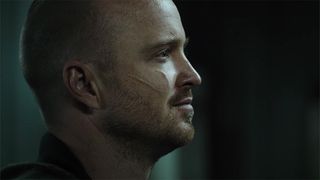 After dropping a tense teaser yesterday, Netflix has unveiled a full length trailer for its upcoming feature-length film, El Camino: A Breaking Bad Movie, and it hints at the return of Mike Ehrmantraut (Jonathan Banks). Watch above.

The two-minute-long clip dives into Aaron Paul’s reprisal of Jesse Pinkman, co-creator of the crystal meth empire he ran alongside Walter White (Bryan Cranston). The trailer illustrates how the movie will pick up moments after the TV show’s final episode, which aired back in 2013.

Dialogue is scarce in the latest clip, but it tracks Pinkman has he seeks refuge from the cops hot on his trail with Breaking Bad favorites, Skinny Pete (Charles Baker) and Badger (Matt L. Jones), and seems to tease his reunion with Mike.

Aaron Paul Says ‘El Camino: A Breaking Bad Movie’ Is About the Struggle to Survive
MoviessponsoredOctober 10, 2019
What To Read Next
Load More
Search Results
Load More