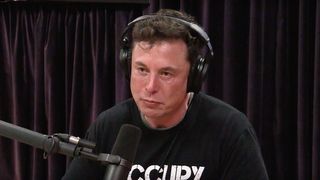 Elon Musk sat down for a chat on Thursday’s The Joe Rogan Experience podcast, and with more than two and a half hours of discussion, there was much to digest. The conversation ran the gamut of topics from the difficulties of running Tesla and Musk’s decision to make flamethrowers for The Boring Company to his ideas for state-regulated artificial intelligence.

Elsewhere, Musk wields a samurai sword, drinks whiskey, takes a few casual hits from a blunt, and still manages to answer questions with clarity. For all that and more, check out the video above, but first, here are five choice takeaways from the podcast.

Time to party with Elon. http://joerogan.live

“Is that a joint or is that a cigar?”

During the conversation, host Joe Rogan pulled out a blunt and a confused-looking Musk responded, “Is that a joint or is that a cigar?” Musk went on to explain that he’s “not a regular smoker of weed” because he “doesn’t find it’s very good for productivity.” Nevertheless, with the knowledge of its legality in California —where the podcast was recorded — Musk indulged in a hit before shrugging the moment by saying, “It’s like a cup of coffee in reverse.”

“If you want a flying car, just put wheels on a helicopter”

What would an Elon Musk interview be if it didn’t discuss the possibilities of transport? According to the SpaceX founder, preliminary plans for an electric plane that lands vertically were in the works, but due to Tesla commitments, he has no desire to develop them.

“I have a lot on my plate,” Musk said. “An electric plane isn’t important right now.” Clarifying, he said, “Electric cars are important, solar energy is important, stationary storage of energy is important.” For those who thought about flying cars as an alternative, forget it. Musk later argued that they’re noisy and insufficient: “If you want a flying car, just put wheels on a helicopter.”

“We should accelerate the transition to sustainable energy”

Amid talk of weed and fanciful sci-fi inventions, Musk did touch on more serious issues, namely sustainable energy. “We’re really playing a crazy game here with the atmosphere and the oceans,” he sighed. “There’s only so much oil we can mine and burn. That’s totally logical. We must have a sustainable-energy transport and energy infrastructure in the long term.”

He later called attempts to work with unsustainable resources a “crazy experiment,” noting that our “momentum to sustainable energy is too slow.”

“Artificial intelligence: if you can’t beat it, join it”

Artificial intelligence should be regulated, according to Musk. Platforms such as Facebook and Twitter, he argued, were examples of “cybernetic collectives of people and machines” where people are “plugged in like nodes on a network, leaves on a big tree.” Musk warned that regulations around AI development ought to be put in place.

That said, Musk did reveal that his company Neuralink, which currently explores how machines can connect humans and computers through electrodes, has “something interesting” to announce in a few months.

“We are most likely in a simulation because we exist”

In addition to AI regulation, Musk argued that we’re living in a simulation.

“I think most likely — this is just about probability — there are many, many simulations,” he said. “You might as well call them reality, or you could call them multiverse.”

Musk later put forward that the medium on which these simulations operate is for the most part boring. “Why would you make a simulation that’s boring? You’d make a simulation that’s way more interesting than base reality,” he stressed. “If you assume any rate of improvement at all, then games will be indistinguishable from reality, or civilization will end. One of those two things will occur.”

Elon Musk Says Tesla Will Run Out of Cash in 10 Months
DesignsponsoredMay 18, 2019