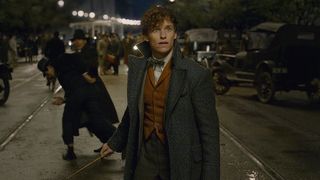 Warner Bros. took us back to the Wizarding World this weekend, dropping a three-minute long Fantastic Beasts: The Crimes of Grindelwald preview at San Diego Comic-Con.

The trailer delivered our first lengthy look at Johnny Depp’s bad guy Gellert Grindelwald, complete with a fittingly creepy speech about freedom, truth, and “higher purposes.” Franchise newcomer Jude Law also gets plenty of trailer-time as a young Albus Dumbledore, with scenes on London Bridge alongside Eddie Redmayne’s Newt Scamander and at Hogwarts.

Along with the trailer, Warner Bros. also dropped a new poster for the film, which shows other cast members such as Ezra Miller, Zoë Kravitz, and Katherine Waterston in period-appropriate garb.

The cast of #FantasticBeasts: The Crimes of Grindelwald have arrived in Hall H. #MagicInSanDiego #SDCC2018 pic.twitter.com/xq6BrVbEXe

Fantastic Beasts: The Crimes of Grindelwald hits theaters on November 16.

Are you excited about the latest foray into J.K. Rowling’s world of witchcraft and wizardry? Let us know in the comments.

Next, check out the trailer for Godzilla: King of the Monsters, which also dropped during SDCC 2018.