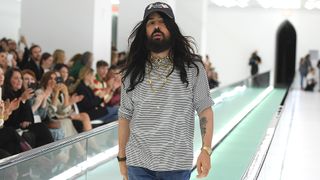 The nominees for this year’s Fashion Awards have officially been announced, recognizing creativity and innovation in fashion. Furthermore, the list of brands and designers acknowledges those who have broken new ground and transformed the possibilities of fashion over the past year.

“I would like to congratulate all the nominees of The Fashion Awards 2019. Each and every one of them is being recognized for their creative excellence and innovation,” says Stephanie Phair, British Fashion Council (BFC) Chair. “I look forward to celebrating them alongside the rest of the industry from across the globe on the 2nd of December at the Royal Albert Hall.”

You can watch The Fashion Awards 2019 nominees video above, then see all of the nominations underneath.

Accessories Designer of the Year

Brand of the Year

British Designer of the Year Menswear

British Designer of the Year Womenswear

Designer of the Year

Model of the Year

Whether You’re Socks or Solo, Shop Our Pick of Slides & Sandals for This Season
SelectssponsoredApril 9, 2019

Here Are All the Winners From the 2019 CFDA Fashion Awards
StylesponsoredJune 4, 2019
Follow
Highsnobiety Style
What To Read Next
Load More
Search Results
Load More