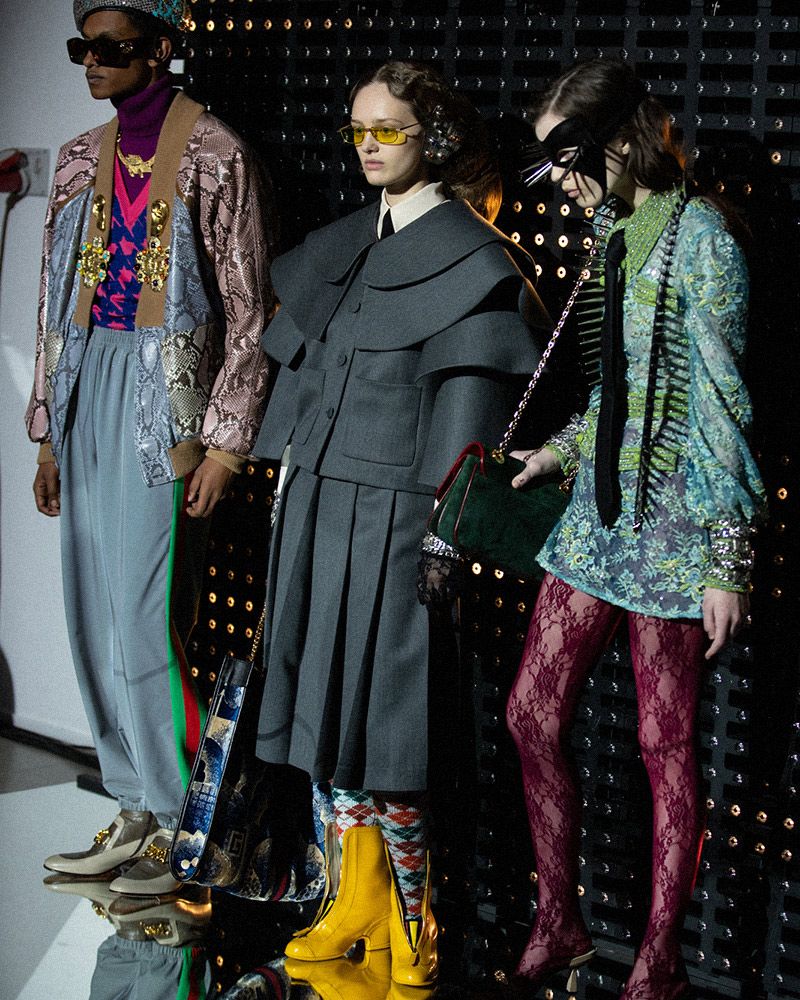 Gucci is an Italian fashion label founded in 1921 by Guccio Gucci, making it one of the oldest Italian fashion brands in operation today. Like many historic fashion houses, the brand started out as a luggage manufacturer, producing luxury travel goods for Italy’s wealthy upper-classes, as well as equestrian equipment.

Initially the brand produced primarily leather goods, as well as premium knitwear, silk goods, shoes and handbags. During the second world war, material constraints owing to the war effort forced the label to use cotton to create their goods. It was during this time that the label introduced its distinctive “Double-G” monogram, as well as the now iconic Gucci stripe, consisting of two green stripes interrupted by a single red bar.

From the 1950s onwards, Gucci experienced incredible success as a label of choice amongst wealthy travellers, Hollywood stars and other well-heeled shoppers, renowned for its extravagant, opulent designs. Guccio Gucci passed away in 1953, but the business continued under the leadership of his three sons, Aldo, Vasco and Rodolfo, In the mid-‘60s, the brand introduced luxury accessories such as eyewear, watches and jewelry to their product line; items which have since become a cornerstone of the label.

In 1983, Rodolfo Gucci passed away, and control was passed to his son, Maurizio, who struggled to maintain Gucci’s successes. During this period, the brand experienced numerous troubles owing to family disputes, tax evasion charges, assassinations and sales to foreign investors. In 1990, American designer Tom Ford was hired as a ready-to-wear designer, eventually being promoted to Creative Director four years later. Ford is credited as being instrumental in helping to restore Gucci’s reputation during that period, reducing the brand’s product offer, streamlining its identity and restoring the opulence and extravagance that had defined the label previously.

In 2004, Tom Ford presented his last collection with Gucci, being replaced by Frida Giannini. In 2006, Giannini took control of both men’s and women’s ready-to-wear design, and served in this role until late 2014.

At the time of Giannini’s departure, there was a perception developing that Gucci had become stale or irrelevant, with a lot of talk about who would replace her. The brand surprised their audience when, in 2015, it was announced that Alessandro Michele would take over as creative director of the brand.

Though Michele had worked for Gucci in various roles for 12 years, he was still relatively unknown as a designer, and it was not clear in what direction he would take the brand. However, Michele’s unique style, blending Gucci’s classic penchant for extravagance and opulence with a theatrical, somewhat-kitschy pageantry, has proven to be a huge success, attracting many young and aspirational customers, as well as numerous fashion insiders. In early 2017, it was announced that Gucci had achieved record sales under Michele’s leadership, fuelling an 11% boost in profits for the brand’s parent-company, Kering, and the brand’s high performance continues to this day.

Show
What is the meaning of the Gucci logo?

The Gucci logo could perhaps be regarded as the most recognizable in terms of luxury branding. Aldo Gucci, son of the fashion house’s founder Guccion, joined Gucci in 1933 and designed the logo for his father. The use of the two G’s is in direct reference to the initials of Guccio Gucci himself – an artistic and memorable way to make the founder’s significance represented in a visually timeless manner.

Show
What does Gucci mean?

Gucci has developed over the years as a symbol of abundance representing not only the luxury fashion house, but also as a form of slang. Its most common vernacular usage is to describe something that is “doing wel’”, and it can be seen in tracks by various established singers and rappers such as Cardi B and Kanye West, in addition to viral artists such as Lil Pump.

Additionally, Gucci’s history with boldness and opulence has similarly meant that it has lent itself over as a consistent source of inspiration for many rappers and hip-hop artists – leading to the development of this slang.

Show
Who is Gucci's creative director?

Alessandro Michele is the current creative designer for Gucci, having previously worked alongside Fendi before being recruited by Tom Ford in 2002. Michele had a number of executive roles before taking on creative direction for Gucci, working as the house’s Leather Goods Design Director, and Associate to Creative Director (Frida Giannini at the time).

Currently Gucci is owned by the French luxury group Kering. In addition to Gucci, Kering and its proprietor Francois Pinault also own Yves Saint Laurent, Balenciaga and Alexander McQueen.

Gucci finds alternatives to imported leather due to League of Nations embargo against Italy; developing a specially woven hemp from Naples printed with the first signature print.

Expansion to United States with first American store in New York City. Guccio Gucci dies at the age of 72.

Launch of the first fragrance.

Gucci parades ready-to-wear fashion for the first time at the Florentine fashion show.

The Gucci loafer is displayed at New York’s MoMa and becomes part of the permanent collection.

Tom Ford is appointed creative director, with his first collection coming out for Autumn ’95.

Relaunching of Jackie bag, opening the era of a Gucci “It” bag Company acquisition by Francois Pinault.

The first TV ad campaign airs for the Gucci by Gucci fragrance.

Jared Leto Makes the Case for Ignoring the Assignment
StylesponsoredJuly 11, 2021

Sponsored Story
10 Pieces of Sterling Silver Jewelry That Will Never Go Out of Style
SelectssponsoredJuly 1, 2021

Here’s Why the Track Jacket Is the Most Underrated Item in the Modern Wardrobe
SelectssponsoredJune 30, 2021