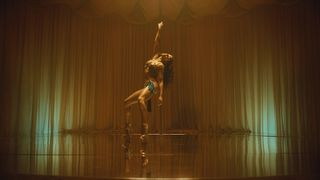 After maintaining a relatively low profile for the past three years, FKA twigs has reemerged with a new single called “Cellophane.” This slow ballad is truly twigs at her most vulnerable with her raw vocals fully exposed as she’s supported by the pulsing of a soft piano and gentle drum beat. “Didn’t I do it for you?/ Why won’t I do it for you?/ Why won’t you do it for me when all I do is for you?” she seductively begs.

In the gorgeous accompanying visual, twigs flexes her pole dancing skills that she’s been showcasing on Instagram for the past nine months. She practically glows within the golden background as she beautifully twirls her slender body around a pole and casually walks on glass while wearing a pair of platform stilettos. Twigs briefly elaborated on the concept behind the visual in a post.

when I wrote cellophane over a year ago a visual narrative came to me immediately, I knew I had to learn how to pole-dance to bring it to life, and so that’s what I did. thank you @andrewthomashuang, for elevating my vision beyond words. you are a visionary. @kelyvon thank you for being with me every step of the way on my precious pole yellow brick road. working with you both on this is a dream come true. Concept by FKA twigs & Andrew Thomas Huang Director: Andrew Thomas Huang @andrewthomashuang Editor: Andrew Thomas Huang Production Company: Object & Animal @objectandanimal Styling: Matthew Josephs @matthew_josephs Custom clothing: Ed Marler @edmarler Hair: Virginie P Moreira @jembomb Make-up & Mask Design: Kabuki @Kabukinyc Choreography: Kelly Yvonne @kelyvon DOP: Daniel Fernández Abelló @abellodani Production Design: Fiona Crombie @fiona_crombie_ Post Production: Analog @Analog_studio Grade: Aubrey Woodiwiss @aubreycolor

Prior to the big drop, twigs wrote the following caption on her social channels: “throughout my life I’ve practiced my way to being the best I could be, it didn’t work this time. I had to tear down every process I’d ever relied on. go deeper. rebuild. start again.” Around this time last year, twigs revealed that she had undergone an intensive laparoscopic surgery to remove fibroid tumors from her uterus.

Back in November, twigs hopped on A$AP Rocky‘s TESTING track “Fukk Sleep” and even co-starred in the accompanying visual. She also featured the rapper in the fourth issue of her AVANTgarden zine. Prior to that, twigs teamed up with Apple on an advertisement to promote the HomePod and was appointed as a creative director for Nike Women’s Spring Zonal Strength Tights campaign in 2017.

Aside from all that, she’s expected to make her film debut in Shia LaBeouf’s Honey Boy this year. FKA twigs is also slated to perform at Red Bull Music Festival New York on May 11 and 12 along with additional international tour dates which you can view below. While we patiently wait for the next twigs project to fully roll out, watch her latest offering in the video above.

FKA twigs Teams Up With WeTransfer to Document the Making of “Cellophane”
MusicsponsoredJune 4, 2019