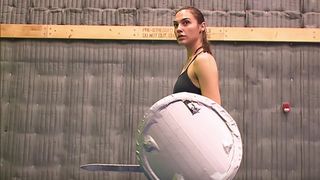 To play a superhero, especially in the DC Universe, you have to be in peak physical condition. For most actors, that means some serious training. Wonder Woman actress Gal Gadot is no exception, undergoing a strict regime to get her ready for her starring role.

The above video shows just a segment of Gadot’s arduous six-month training. Her daily routine consisted of two hours of weightlifting, two hours of fight choreography, and two hours of horseback riding.

You have created so much that will last forever. Wonderful things. Your values are left in your movies , your friends and most of all your special beautiful family. The love you have for people, kindness and selflessness are your legacy to us. Thank you Zack. Love you always .

All that work didn’t go to waste as Wonder Woman has been performing incredibly well at the box office — largely due to Gadot’s performance. The movie brought in $100.5 million in the U.S. in the movie’s first opening weekend, overtaking Fifty Shades of Grey as the biggest debut for a film directed by a woman.

In other movie news, Starship Troopers: Traitor of Mars heads to the big screen for one night only.

Feature Content
‘Fight Club’ at 20: The Brad Pitt Workout that Will Get you Ripped for a Revolution
LifesponsoredJuly 31, 2017