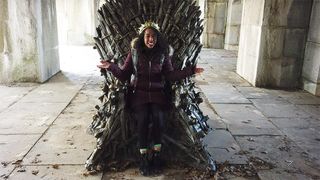 The final Iron Throne hidden by HBO in its promotional Game of Thrones challenge has been found in Queens, New York City. The competition was announced just over a week ago and saw fans racing to locate the six Thrones placed in various locations around the globe to promote the show’s eighth and final season.

Melanie Joaquín, who discovered the final throne in Fort Totten Park in Queens just ten minutes after HBO posted the clue, said she knew where it was located immediately when HBO posted a clue to its social media accounts. Watch her reaction — complete with a man bedecked in fur giving her the Baratheon crown —in the video up top.

The other five thrones were located in Canada, Spain, Brazil, Sweden, and in the UK. Revisit the first clue below.

Seek the Weirwood in this Kingdom on Earth. Begin your Quest #ForTheThrone. #ThroneoftheForest (LINK IN BIO)

Game of Thrones season eight hits HBO on April 14. Watch the trailer below.

20 Characters Sit Atop the Iron Throne in New ‘Game of Thrones’ Posters
MoviessponsoredFebruary 28, 2019

Here’s How Twitter Reacted to That Divisive ‘Game of Thrones’ Series Finale
MoviessponsoredMay 20, 2019

The Ending of ‘Game of Thrones’ Is Apparently Hidden in This Spotify Playlist
MusicsponsoredApril 11, 2019