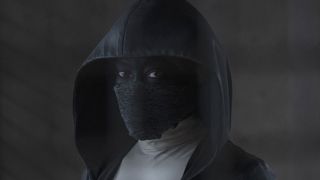 HBO has revealed the official release date for its Watchmen series — the show will be arriving on October 20. The first full trailer for Damon Lindelof’s much-anticipated series dropped back in July, watch it above.

The miniseries will not follow the original Alan Moore 1986 novel too closely and instead will run as a sort of sequel. As HBO defines it, Watchmen is “set in an alternate history where ‘superheroes’ are treated as outlaws,” and promises to bring “the nostalgia of the original groundbreaking graphic novel of the same name while attempting to break new ground of its own.”

Regina King plays the lead in the show, which also stars Jeremy Irons as Ozymandias, Don Johnson, Tim Blake Nelson, and Jean Smart. The dark new trailer teases that Dr. Manhattan will be part of the story. It also features Silk Spectre Laurie as an FBI agent and briefly shows a headline noting the death of Ozymandias.

Why Yahya Abdul-Mateen II Is a Man to Watch
In-DepthsponsoredDecember 13, 2019