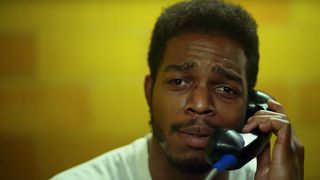 Get your tissues at the ready, because the trailer for Barry Jenkins’ If Beale Street Could Talk is extremely emotional. Watch above.

Regina King, Teyonah Parris, and Brian Tyree Henry also star. The film is an adaptation of James Baldwin’s novel of the same name and serves as the first time Baldwin’s work has been adapted into an English-language feature. Beale Street hails from Annapurna Pictures — the production studio that worked on the A24-distributed Spring Breakers, and Warner Bros.’ Her.

If Beale Street Could Talk arrives in theaters nationwide Fall 2018.

Will you be watching Beale Street? Let us know in the comments.

In other entertainment news, Michael B. Jordan is now the face of Coach menswear.

Get Lost in the First Haunting Trailer for ‘In the Tall Grass’
MoviessponsoredSeptember 17, 2019
What To Read Next
Load More
Search Results
Load More