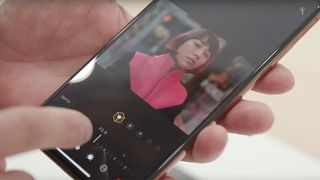 Highsnobiety‘s Jeff Carvalho headed to Apple’s Steve Job Theater in Cupertino, California for a hands-on first look at the new iPhone Xs and Xs Max in action. Watch our in-depth preview in the video up top.

The video demonstrates the differences in the iPhone S series — the Xs and Xs Max. In aesthetic terms, the 10s Max boasts a much larger, 6.5 inch screen, and both S series models now flex a new gold colorway — but of course these are not the only updates.

Apple produces its own silicon for the phones’ processors, which “allows Apple to really tune into the software to the hardware,” Jeff explains, before showing how the brand has implemented the software in the new iterations.

“Apple has really done an exceptional job of fine tuning the camera, and also the camera software itself to work very well with the phone.” The software, in this sense, is depth of field control, which the video shows in action. “What’s amazing about this is that it’s done through the software itself … it allows you to have full control.”

The updated OLED display is taken up by the use of durable glass and the super rendered, larger display. To demonstrate how videos look on the cell, Jeff sticks on Spielerg’s Ready Player One — just a couple of seconds in action shows how super sharp the display is. “Video content really does shine on this phone,” he says.

What’s more, “Because of the width of the phone, it allows the speakers to be placed wider to give a much more spacial play in the stereo sound that’s coming off of it. This thing sounds great.”

Discussing Apple’s Apple Watch Series 4, Jeff reveals that, “Absolutely the coolest feature is the fact we have an edge to edge display, as well as the much talked about haptic feedback.” He continues, “As you go into the watch and scroll you get that response that you need that lets you know that you’re bouncing between positions, especially when you’re looking at content on the watch.”

Check out our first look in full above, and then let us know what you think of the new devices below.

Now here’s everything that was announced at Apple today.

Is This Apple’s Much-Anticipated iPhone 11?
DesignsponsoredMay 1, 2019

Apple Is on a Mission to Trigger Your Senses in New ASMR iPhone Ads
DesignsponsoredAugust 9, 2019

Here’s How Much It Costs Apple to Make an iPhone 11 Pro Max
DesignsponsoredOctober 16, 2019
Follow
Highsnobiety Design
What To Read Next
Load More
Search Results
Load More