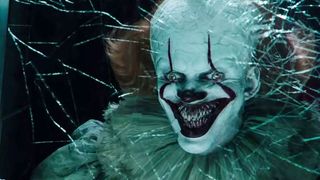 The second installment of shape-shifting clown horror It Chapter Two arrives early next month, and in the run-up to its release, Warner Bros. has dropped two new TV spots that highlight the terror to come.

The two teasers are each 30 seconds long, which is apparently plenty of time to pack in the jump scares. The first spot shows a scene in which a young girl is attempting to comfort evil clown Pennywise before becoming his dinner. Watch above.

The second spotlights Jessica Chastain’s character as she speaks with a creepy elderly lady who is most likely Pennywise in disguise. Watch below.

It Chapter Two is set 27 years after the last movie and sees the Losers Club reunited once more to combat the sewer-dwelling villain.

Bill Skarsgård, James McAvoy, Bill Hader, and Finn Wolfhard star alongside Chastain. The movie lands in US theaters on September 6.

The First Reviews for ‘It Chapter Two’ Are In & They’re Divisive
MoviessponsoredAugust 21, 2019

‘It Chapter Two’ is “Pointlessly Long,” According to Critics
MoviessponsoredSeptember 4, 2019
Chapter Two: The Art of Curation
UncategorizedsponsoredMay 4, 2020