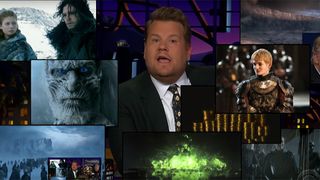 If rewatching every single episode of Game of Thrones before season eight premieres on HBO this Sunday sounds like too arduous a task, don’t worry, James Corden just came through for you. On yesterday’s episode of The Late Late Show With James Corden, the British host recapped all seven seasons in under four minutes. And what’s more, he made it rhyme.

In the clip, Corden moves through crucial plot points with ease, weaving a story of incest, wildfire, dragons, and White Walkers together and condensing all 67 episodes into one big digestible bite. As if that wasn’t enough, he also makes references to Donald Trump, HBO’s streaming service, and white people power walking.

After he’s finished, Corden tips his hat to the Late Late Show writer who — after spending two days, 15 hours, and 30 minutes watching the whole show for the first time — wrote the brilliant rhyming script you can watch above.