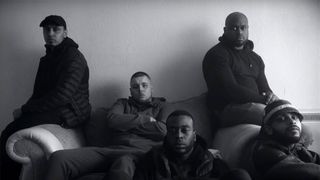 Jorja Smith just dropped the official music video for her song “Blue Lights”, which was the British singer-songwriter’s debut single. The stunning black and white visuals were shot by photographer Olivia Rose in Smith’s hometown of Walsall and features an all-male cast, some of whom are prominent locals, like Mike Skinner of The Streets.

“I wanted to capture men/boys of Walsall and Birmingham from all different walks of life doing everyday activities to show that the stereotypes we are bombarded with are misleading and, ultimately, harmful. I chose Walsall as the setting for the video as that is where I am from and where I drew my inspiration from when writing the son,” the singer explained in a press release.

Speaking on the making of the video, Olivia Rose describes the “mad turnaround – I ended up in Walsall a few times in one week, scouting locations and cast members. What’s really beautiful is that a lot of the cast and places are authentically related back to Jorja – her dad, the boys who inspired the song, the park where she hung out as a teenager, the owner of the restaurant where she had her first gig.”

Jorja Smith’s debut album Lost & Found is set to drop June 8th and you can preorder it here.

Revisit “On My Mind” below.

The Weeknd Gets Flipped Upside Down While Performing “Blinding Lights” on ‘Kimmel!’
MusicsponsoredJanuary 21, 2020