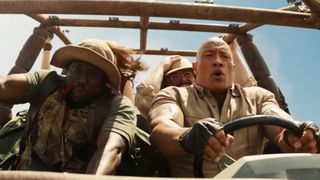 Dwayne “The Rock” Johnson, Kevin Hart, Jack Black and Karen Gillan drop back into the wild, whacky, and hilarious world of Jumanji. Titled Jumanji: The Next Level, our favorite group of video game heroes leave the man-eating hippopotamus infested jungle for a scorching hot desert setting.

This time around the squad of high schoolers are sent in different bodies with the addition of Danny Devito and Danny Glover joining in on the fun. Of course, they are both played by comedic-duo of the Rock and Hart, who will probably end up stealing the show.

The Jumanji sequel looks to ramp up the action as the crew stare down baboons, monstrous ostriches, massive snakes, and another evil army. With Jake Kasdan returning to direct, the magic of the films predecessor Jumanji: Welcome to the Jungle is still very much present.

Jumanji: The Next Level hits theaters on December 13. Watch the action-packed trailer above.