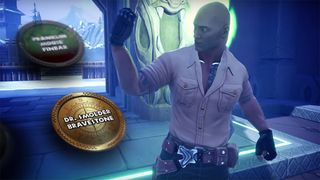 You can play as Dwayne “The Rock” Johnson, Kevin Hart, Jack Black, and Karen Gillan in Jumanji: The Video Game, choosing between their characters Dr. Smolder Bravestone, Franklin “Mouse” Finbar, Professor Shelly Oberon, and Ruby Roundhouse. The game is based on the 2017 movie, Jumanji: Welcome to the Jungle, as players must recover jewels to save Jumanji. You can participate with friends in split-screen play or simply venture out alone with AI companions, but be sure to keep an eye out for evil marauders, menacing beasts, and deadly traps.

Jumanji: The Video Game comes to Xbox One, PlayStation 4, Nintendo Switch, and PC November 8. You can pre-order it here.