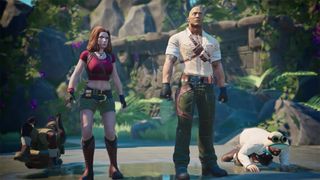 Seeing as Jumanji: Enter the Jungle centered around a video game, it’s only right that the movie franchise is now getting just that, its own video game. Bandai Namco Entertainment Europe, Outright Games, and Funsolve have joined forces with Sony Pictures to create Jumanji: The Video Game, and Dwayne “The Rock” Johnson, Kevin Hart, Jack Black, and Karen Gillan are all in it.

Based on the new Jumanji movies, Jumanji: The Video Game will allow up to four players in online or split-screen modes, as you work together to combine abilities, collect Jumanji jewels, and survive in a hostile world. Courtesy of the announcement video, we see Dr. Smolder Bravestone, Ruby Roundhouse, Franklin “Mouse” Finbar, and Professor Shelly Oberon dropping into the jungle.

Jumanji: The Video Game is scheduled to launch on November 15, a month before the third, yet-to-be-titled Jumanji movie. The game is coming to Nintendo Switch, PlayStation 4, Xbox One, and PC.

‘John Wick’ Is Getting Its Own Strategic Video Game
MoviessponsoredMay 9, 2019

Internet Legend The Duct-Taped Gamer Is Getting His Own Documentary
MoviessponsoredMarch 3, 2020

‘Stranger Things’ Is Getting Its Own ‘Fortnite’ Event
LifestylesponsoredJuly 3, 2019

The Classic ‘Blade Runner’ Video Game Is Getting a Remastered Edition
Video GamessponsoredMarch 13, 2020
What To Read Next
Load More
Search Results
Load More