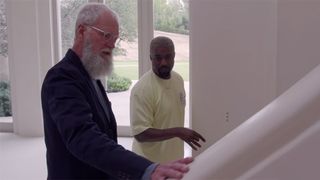 Netflix has shared another segment from David Letterman‘s My Next Guest Needs No Introduction, this time showcasing the immaculate minimalist interior of Kanye West‘s home.

Thanks to Kim Kardashian‘s “73 Questions” interview with Vogue earlier in the year, we have already seen some of the house’s interiors, including the bedroom, bathroom, living room, and kitchen. However, this new, more Kanye-focused clip shows off a few new areas. Watch above.

In the video, we’re shown what appears to be another living room, featuring a collection of ceramics by Yuji Ueda, who’s represented by Takashi Murakami. As Letterman points out, the room, and indeed the entire home, has “wabi-sabi vibes,” as Kanye put it. Wabi-sabi is a Japanese aesthetic concept that accepts the beauty in imperfection and impermanence.

The stunning bathroom features again, with Letterman reacting exactly how any normal person would when presented with such a space. Finally, West takes Letterman into what can only be described as a YEEZY showroom. Whether it’s West’s personal wardrobe or not is unclear. Regardless, the rapper later gives the interviewer a style makeover, which you can watch below.

Season two of My Next Guest Needs No Introduction is available now on Netflix.