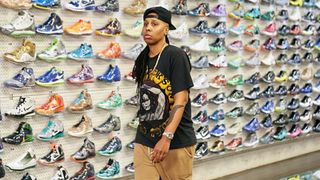 Following 18-year-old rapper, YoungBoy Never Broke Again in the previous episode of Sneaker Shopping, award-winning actress and screenwriter, Lena Waithe is now in the spotlight for this week’s episode.

Finally linked up with this guy. @complexsneakers ✌?(link in bio)

Linking up with host Joe La Puma at Stadium Goods in New York City, stunting in Sean Wotherspoon‘s hybrid Air Max 1/97, she talks about her childhood in Chicago idolizing Michael Jordan, and her love for Jordans, along with sharing why she doesn’t wear women’s sneakers, her love for Kanye’s sneaker designs, Pharrell’s Human Race line and more.

Check out what she ends up copping in the video above.