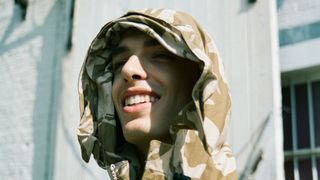 The autumn equinox has quickly descended upon us, but London-based singer-songwriter Leo Bhanji is perfectly fit to soundtrack such a momentous transition. The 19-year-old made his official debut this past May, suffocating listeners in the thick fog of his angst-ridden alt-pop tunes. Today, we’re premiering the NRV-directed video for his new single “Blood & Guts.”

“I played around a lot with this song and tried to capture a whole train of thought quickly without filtering it too much or it being overly composed; I was picturing like summers where I didn’t know why I was at events, wasn’t 100% sure I wanted to be there and kind of had to make an effort to let go and enjoy things,” Bhanji explained in an email. “Since I’m done being a teenager now it’s interesting to recount what parts of those things stuck in my memories longest – I don’t have a good memory at all, but sometimes while I’m writing I’ll get a line that just brings things rushing back and colours the whole song with that quick glimpse.”

Bask in the warmth of the song while you watch the lo-fi visual above.

Listen to Leaked Drake & Future Track “Big Mood” Before It Gets Taken Down
MusicsponsoredJuly 26, 2019

This ASICS GEL-Kinsei OG Gets Us In the Mood for the Olympics
SneakerssponsoredJanuary 2, 2020

AMIRI Gets in the Halloween Mood With Luxe Skel-Toe Slip-On
SneakerssponsoredOctober 29, 2019