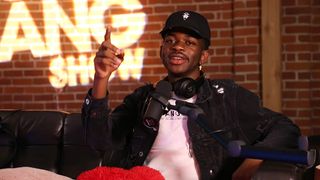 Viral rapper Lil Nas X is still riding the hype wave around “Old Town Road,” his breakout hit that has since gone on to smash Drake’s streaming record. In a recent interview on The Zach Sang Show, the rapper was asked about his thoughts on Dave East commenting that the track was “fucking wack” on Instagram Live.

“I honestly have gotten this question so many, it’s like, I have the No. 1 song in the country,” said Lil Nas X. “I do not give a fuck about what Dave East is saying.”

During the discussion, he also touched on the song’s success and more of his recent accomplishments. Last week, cupcakke dropped her version of the track which is appropriately titled “Old Town Hoe.” Watch the full interview above.

Lil Nas X’s “Old Town Road” Is the Most-Streamed Song in the US Right Now
MusicsponsoredJuly 11, 2019