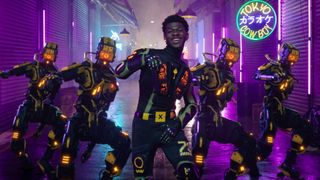 After making a panini with celebrity chef Gordon Ramsay, ever-popular musician Lil Nas X is back with the music video for his second single, “Panini.” The clip is set in a futuristic world with flying cars and hologram billboards.

Lil Nas X follows guest star, Disney actress Skai Jackson, everywhere she goes in the video for “Panini,” as he is attempting to win her over as a new fan. The 20-year-old artist came up with the treatment for the video himself, as film director, special effects artist, musician, and YouTuber Mike Diva directed the aesthetic.

Lil Nas X previously disclosed that “Panini” is a song about a fan that loves you early in your career, but shies away from you when you become more popular and mainstream. “Panini” can be found on the rapper’s debut EP, 7, which you can revisit below.