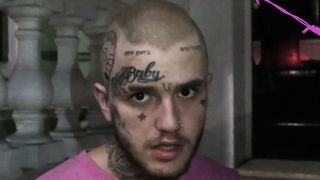 Following the release of “Save That Shit” in December and the Marshmello-produced track “Spotlight” earlier this year, fans of the late Lil Peep can now listen to another previously unheard song from the artist.

The latest single “4 Gold Chains” features production from Clams Casino and was first teased by Peep a month before his passing. In the aftermath, many fans speculated as to whether or not the track would come to light – and now it has, complete with an intimate video.

As seen in the gallery above, the new solo-shot visuals feature Peep chilling in London as he lip-syncs to the slow, synth track with reverberated vocals. The song, which touches upon the excessiveness  of fame, features the lyrics “Four Gold Chains / Gave two to my brothers / Fame bring pain / But the pain make money.”

In addition to the YouTube clip, the song is also available on Apple Music, Spotify, and SoundCloud.

Are you feeling the track? Let us know your thoughts below.

Another Posthumous Lil Peep Album Could Be Dropping Soon
MusicsponsoredJuly 15, 2019