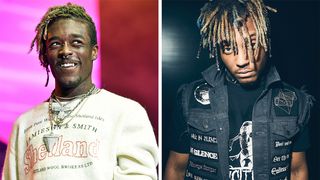 Two of hip-hop’s more promising young acts in Lil Uzi Vert and Juice WRLD have joined forces to release their first official collaborative single, after teasing a “Lucid Dreams” remix. Following the release of Juice WRLD’s well-received debut album, “Wasted” has been added to the Goodbye and Good Riddance tracklist.

The collaboration was premiered today on Apple Music’s Beats 1 radio show, as you can take advantage of streaming options above and below. After having a listen, be sure to hit is with your thoughts on the emo/punk/hip-hop experimental sound.

For more, watch Juice WRLD freestyle for over an hour on Tim Westwood’s show.

A Brief Guide to the Ubiquity of Rap Label Disputes & the Artists Stuck in Hell
MusicsponsoredMarch 5, 2020
Follow
Highsnobiety Music
What To Read Next
Load More
Search Results
Load More