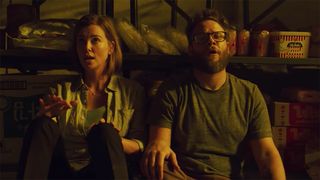 After getting our first look at the film last month, Seth Rogen shares the Red Band trailer for director Jonathan Levine’s new comedy, Long Shot. From Rogen and Evan Goldberg, who created the likes of This Is the End and Neighbors, Long Shot pits Rogen alongside Charlize Theron.

New trailer for @LongShotMovie! If you’re watching at work maybe wear headphones. Or don’t. And enjoy a very colorful conversation with your coworkers. #RedBand #LongShot pic.twitter.com/hf7xuW4OOZ

Theron stars as Charlotte Field, a sophisticated politician who is essentially a modern-day renaissance woman, while Rogen portrays Fred Flarsky, a happy-go-lucky journalist with a propensity for trouble. The two have virtually nothing in common, save for the fact that Charlotte babysat Fred Flarsky while they were growing up.

In Long Shot, Charlotte and Fred reconnect unexpectedly as Charlotte is gearing up for a Presidential run. Upon hiring Fred as her new speechwriter, the two rekindle their relationship, and sparks begin to fly. Their newfound adventure not only leads them to an unlikely romance, but also a string of unexpected and dangerous incidents.

Elevate Your Summer ’Fits With Our Pick of the Best Denim Jackets
SelectssponsoredFebruary 19, 2019

The Air Jordan 5 Is Officially a Golf Shoe
SneakerssponsoredFebruary 21, 2020