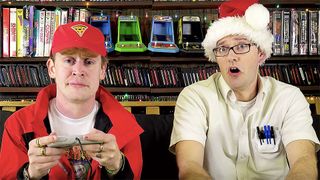 Macaulay Culkin is on a mission in the new episode of Angry Video Game Nerd, and that mission is to stop everyone in the world hating on the Home Alone video games.

Culkin arrives at presenter James Rolfe’s home rocking a ToeJam & Earl tee and pretending to be a pizza delivery boy — a shout-out to his character Kevin’s love of cheese pizza in Home Alone (not to mention Culkin’s The Velvet Underground-inspired band, The Pizza Underground) — and hands over a pizza box packed with old-school Home Alone games, from cartridges and floppy discs to PlayStation 2 CDs.

While Rolfe appears pretty adamant that the games will suck, he gives in and agrees to play alongside Culkin. Watch above.

Have you played and enjoyed any of the Home Alone video games? Let us know in the comments.

In other news, ‘Bohemian Rhapsody’ has become the highest-grossing music biopic ever.

Work From Home
Simulate a Fulfilling Life While Stuck at Home With These 10 Video Games
LifestylesponsoredMarch 18, 2020

This Disney Nintendo Switch With a Mickey Mouse Home Button Is Exclusive to Japan
Video GamessponsoredJuly 25, 2019