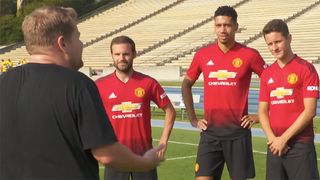 While on a pre-season tour of America, Manchester United played against the likes of A.C. Milan, Real Madrid, and Liverpool. Yet it wasn’t a professional opponent that posed the greatest challenge for the English club.

United set up camp at UCLA, where members from the squad met up with James Corden and 100 children for a friendly match.

Stars Juan Mata, Ander Herrera, and Chris Smalling faced off against a horde of “young and hungry” football players, which included 10 goalkeepers and a vocal coach in James Corden.

The “professional athletes against 100 children” formula has been done before, of course. But that doesn’t mean watching players being swamped by energetic kids ever stops being funny.

Watch the video above and leave your thoughts in the comments.

In other news, Patta has unveiled a limited edition football jersey for Appelsap 2018. Check it out here.