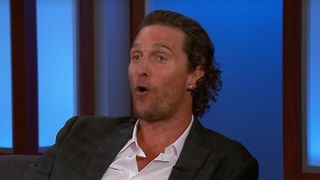 Matthew McConaughey and Snoop Dogg just wrapped up filming Harmony Korine’s next movie, The Beach Bum, in which McConaughey plays a rebellious stoner named Moondog who “lives life by his own rules.”

While on Jimmy Kimmel Live, the Mud actor revealed that Snoop Dogg tricked him into getting high on camera. McConaughey said that, while filming a 6-minute scene, the rapper swapped out the prop weed for what he called “Snoop weed.”

Halfway through filming the scene Snoop came clean on what he had done. McConaughey added he has little recollection of what happened in the following nine hours.

McConaughey also spoke about how fun it was to work with Snoop Dogg and described the rapper as a “prince of a man.”

The Beach Bum, which stars Isla Fisher and Zac Efron, is set to hit theatres later this year.

Next, check out McConaughey’s low-key fire ’fits from the movie in question here.

Digging Deeper
A History for the Blunted: How Weed Culture Evolved Through Hip-Hop
MusicsponsoredApril 15, 2019