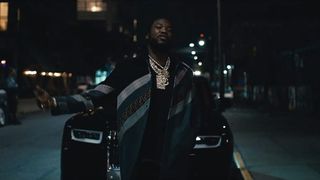 After partying with the dead alongside T.I. in the official video for “Jefe,” Meek Mill delivers the visuals for “Dangerous” featuring PnB Rock and Jeremih, taken off the rapper’s EP Legends Of The Summer, which is Meek Mill’s first project since getting released from prison in April.

The Kid Art-directed clip contrasts to how the Philadelphia rapper was living before his prison release, as Meek Mill is seen rapping in the streets celebrating his return to a lavish life with sequences of scantily clad women, stacks of money and luxury goods spliced into the visual. In addition, black-and-white scenes of Jeremih and PnB delivering their respective bars are featured.

Since his release from prison, Meek Mill has been quietly grinding on a new album, as the Philly rapper hinted in an Instagram post last month that an LP is in the works and will be making its debut soon.

Buy anything from shop.meekmill.com and get a digital copy of my upcoming album bundled with the item!!!!

In other new music, Thundercat connects with BADBADNOTGOOD and Flying Lotus on “King of the Hill.”

Highsnobiety Premiere
Yeek & Jesse Will Fully Revive You From a “Fatigued” State
MusicsponsoredMay 30, 2019