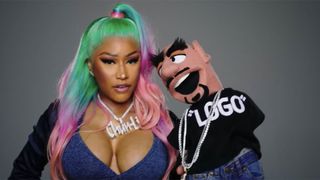 Nicki Minaj has released the official music video for “Barbie Dreams.” Directed by Hype Williams, the visuals feature the Bronx rapper hanging out with puppet versions of Lil Wayne, DJ Khaled, and 6ix9ine.

“Barbie Dreams” made a splash upon its release for calling out everyone from 50 Cent to Odell Beckham Jr. The single hails from her fourth studio album Queen, which dropped in August.

Minaj’s latest video follows the latest episode of Queen Radio, where she addressed her recent fight with Cardi B at the Harper’s Bazaar ICONS Party.

Aside from “Barbie Dreams,” Minaj has also dropped visuals for Queen tracks “Chun-Li,” “Barbie Tingz,” “Bed” with Ariana Grande, and “Ganja Burn,” which you can revisit below.

In other music news, Noname revealed the official tracklist and album artwork for her upcoming album ‘Room 25.’

EXCLUSIVE: Artists Speak Out Against Chris Brown Over Copyright Allegations in “Wobble Up”
DesignsponsoredMay 22, 2019