Launched in Spring 2002, Nike SB helped kickstart the modern sneaker collecting and reselling phenomenon with its update of the Swoosh’s ’80s Dunk basketball silhouette. Through a combination of creative colorways, collaborations with skate brands, and core distribution exclusive to independent skate stores, Nike finally cracked a skateboarding market that had long eluded it.

But rather than being worn for skateboarding, the majority of SB Dunks were trading hands around the world for several times their retail price. To preserve the shoes and keep their ever-expanding collections in check, sneaker enthusiasts would keep their prized possessions in their original boxes. Spotting an opportunity, Nike SB started making special boxes to differentiate its skate shoes from general release Dunks, which had started to make a comeback following the success of the SB version.

When the first Nike-branded shoes were launched in 1972, sneakers tended to come in either white or blue boxes. To make his new shoes stand out, Nike founder Phil Knight opted for a bright orange box.

Nike generally maintained this bright-box approach even as designs changed, and in 2000 settled on a two-tone design that became the standard for the next six years: contrasting orange and raw cardboard separated by a dark gray stripe, with a small Swoosh on the lid and “JUST DO IT” on the side. This was the box that housed many of the brand’s second-wave Dunks, including the pre-SB Co.Jp line and limited edition Pro B Dunks.

“Just like skateboarding, everything (back in the day) including our box color and design strategy was done on instinct, and it was always evolving. There was no specific strategy in place around ‘Box Color Eras’ – it was really the community and beyond who started and propelled the concept. That was the beauty of Nike SB back then, we really ‘JUST DID IT.’ Michael Hernandez was the mastermind behind the boxes and we were one of the first categories to come out with our own box other than the regular Nike orange box. It took multiple signatures to get a special box approved outside of the Nike box standard, but thanks to Sandy Bodecker and his belief in who we are and that we truly were different, it went through, and to this day, Nike SB boxes have become legendary. The boxes, in hindsight, became a good marker to delineate our shoes and what we did then.”

Once Nike SB was launched, the Swoosh sought to distinguish its skateboarding line from its other lines through shoeboxes. Here, we look back at each era of the Nike SB box, from orange to teal.

Throughout 2002, Nike SB released some of its most memorable and revered shoes in what has become known as the “Orange Box Era.” These 14 SB Dunks (12 low-tops and two high) included the special colorways for Nike’s original four pro skaters — Gino Iannucci, Danny Supa, Reese Forbes, and Richard Mulder — and Nike SB’s groundbreaking first collaboration with Supreme. 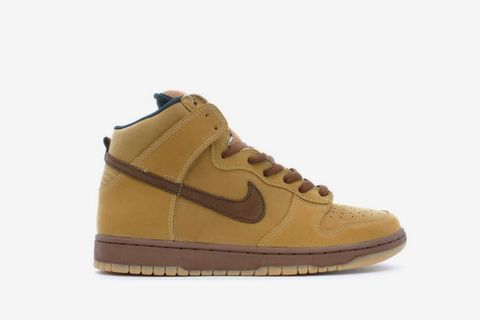 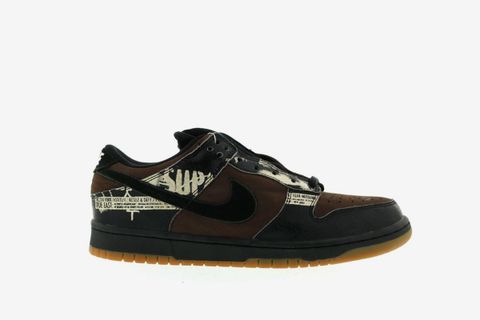 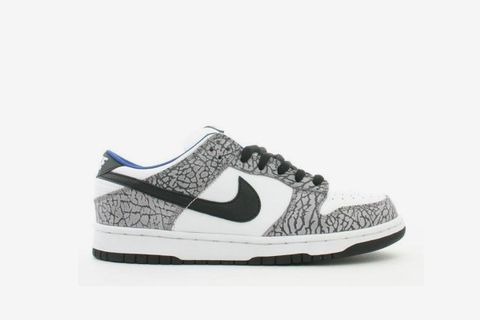 The late Sandy Bodecker was the driving force behind Nike SB and knew all too well how important credibility and core values are to the skateboarding community, which is why SB started off with a small, respected team and availability was limited to independent skate stores.

Like Phil Knight, Bodecker realized an eye-catching shoebox would stand out at stores. He also knew that if skate shops were going to get on board with a corporate sports behemoth, they would need something to differentiate themselves from sports stores. And so the standard Nike box made way for something special.

With the SB Dunk becoming the most sought-after sneaker on the market, the shoes got their own collectible boxes from 2003, starting with the silver box. The box itself was more sturdy than the average Nike box and came with a few nice details, such as a bright green sizing label with pixilated font. The inside of the box and the wrapping paper also featured a subtle woodgrain pattern as a nod to the shoes’ intended use.

The silver box era also saw the addition of new technical skate shoes the URL and E-Cue, which, despite their durability, never caught on and were eventually dropped. 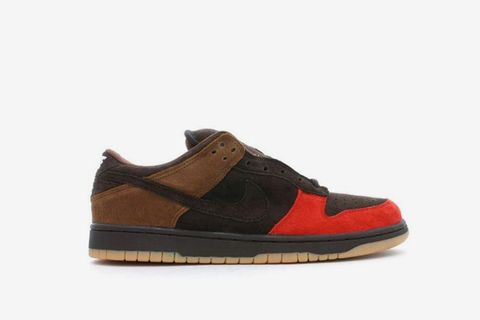 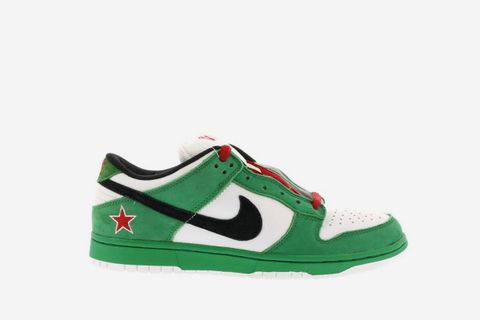 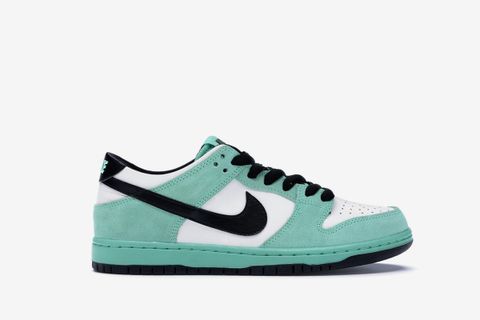 For Nike SB super-collector Nate Wallace, the “Pink Box Era” was a groundbreaking time. “This is when they really started pushing the envelope with colorways and materials,” he says. “You saw this with shoes like Reese Forbes’ ‘Hunter,’ which featured a burlap sack material, and the ‘De La Soul’ Dunks with the holographic print.” For many SB enthusiasts, the “Pink Box Era” was the line’s best. In early 2004, Nike SB also signed prodigy Paul Rodriguez, who became the first Nike skater to be awarded his own signature line of shoes: the P-Rod.

The black box with purple Nike SB branding was home to another strong lineup of styles. During this time, SB had all but thrown out the rulebook in terms of skate shoe design. Patent leather, metallic leather, and faux fur could hardly be considered grip tape-friendly materials, but collectors remained undeterred.

With a growing skate team but fewer Dunk models built for skating, it felt like every release by this point was a collab or had some kind of tenuous theme or nickname. There were Dunks based on or named after aftershaves, disgraced celebrities, cuddly toys, ’70s sitcoms, ’80s pop bands, ’90s alternative bands, Chinese money cats, and even a golf-inspired Dunk complete with lace-covering kiltie. 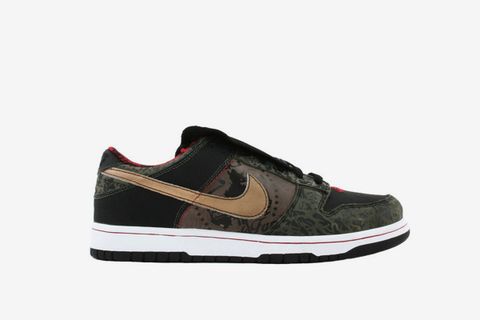 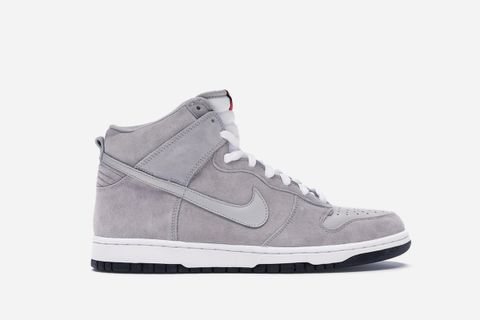 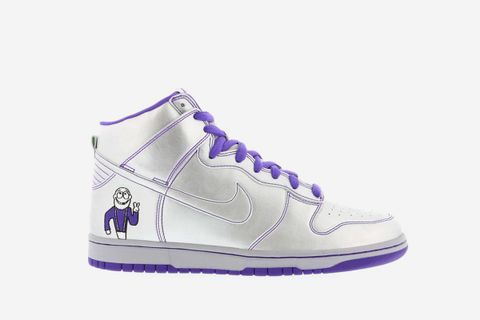 With the exception of the “Lobster” Dunk made with Boston sneaker boutique Concepts, there were surprisingly few collaborations during the “Gold Box Era.” Meanwhile, the shoe that defined the period was presumed to be the work of a crazy counterfeiter but wound up being a bizarre in-line mash-up.

Images started to appear online of a strange Dunk that took elements of practically every high-profile SB release and stuck them all on one shoe. Created to promote Nothing but the Truth, Nike SB’s first full-length skate video, the over-the-top design was named the “What the Dunk” and came out in ultra-limited quantities in cities that hosted the film’s screenings.

Despite an initially hostile reaction to this Frankenstein’s monster of a shoe, the release temporarily brought back SB Dunk pandemonium, and today rare “What the Dunks” still command huge resale prices. 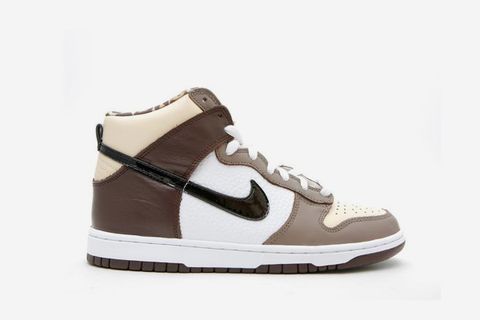 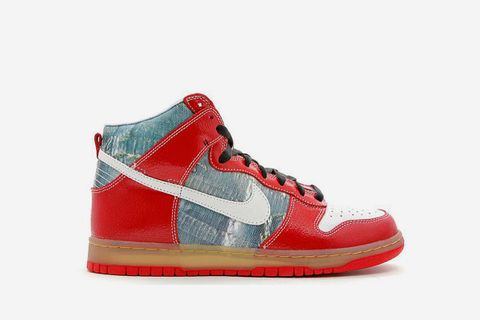 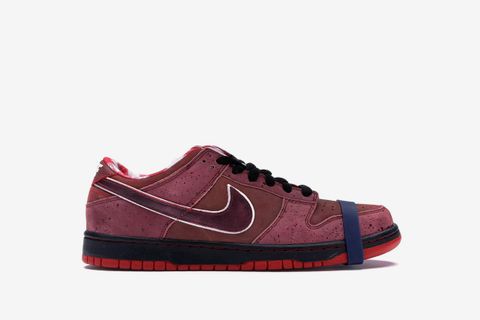 The “Blue Box Era” saw fading interest in the SB Dunk, with collectors chasing new trends and skateboarders returning to simple vulcanized footwear, with the likes of Vans and Emerica making a comeback.

“The blue box is where I feel a lot of buzz started dying down,” says Wallace. “There were a few questionable decisions being made, such as switching the Dunk Low to a thinner tongue and removing the strap from the Dunk Mids.”

But Nike SB still had an unexpected winner up its sleeve in the form of a pro shoe for Habitat skater Stefan Janoski. Looking like a Vans Era mixed with a boat shoe, Nike SB’s simplistic suede Zoom Stefan Janoski was totally unlike the bulky Dunk and became an instant hit.

During the “Blue Box Era,” Nike SB also debuted signature models for skaters Omar Salazar and Eric Koston. The shoes were well-designed technical skate shoes, but neither had the crossover appeal of the Janoski or the Dunk before it. 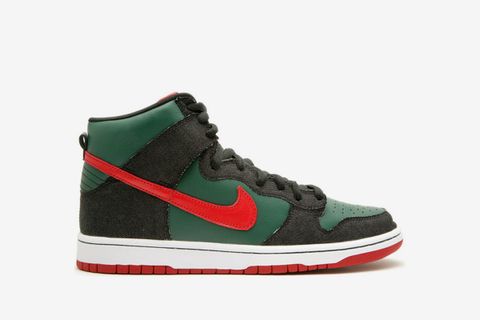 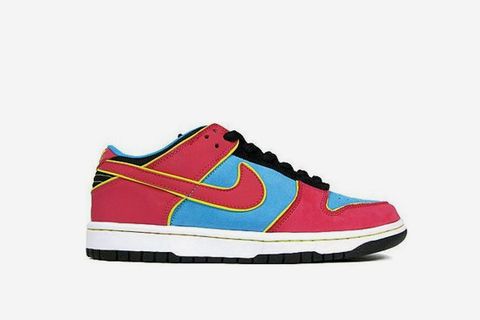 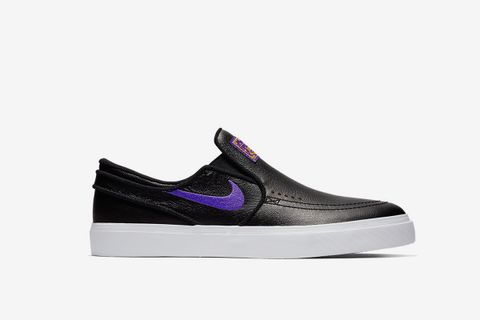 After the long reign of the blue box, Nike SB took a different turn. Scrapping the original method of only supplying goods to core skate stores, distribution was opened up to sports and lifestyle retailers. With higher production numbers and a drop in quality, the “Taped Box Era” felt like a shadow of the line’s glory days. 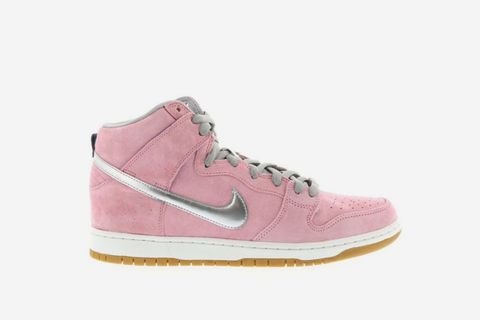 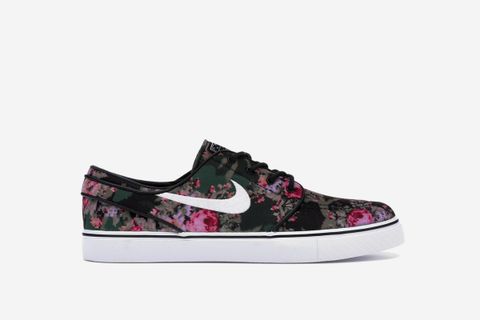 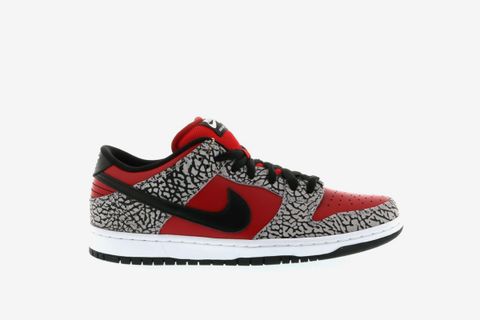 If the “Taped Box Era” was a low point, the teal (or “Tiffany”) boxes heralded the start of the SB revival.

With colors taken from one of SB’s most famous models, 2005’s Diamond Supply Co. SB Dunk Low “Diamond” (or “Tiffany,” as in Tiffany & Co., whose jewelry boxes inspired the shoe’s colorway), the teal boxes looked to past successes, ushering in high-top versions of some of the most iconic Dunk Lows, including the “Diamond,” the four OG pro shoes, the “De La Soul,” and a blacked-out version of Jeff Staple’s infamous “Pigeon” (although the latter actually came in a pink box like the original).

With celebrity endorsements from the likes of Travis Scott and Virgil Abloh, new collaborations with Diamond Supply Co. and Staple, and interesting new takes like the recent Air Jordan 11 “Bred”-inspired model, it’ll be interesting to see if renewed interest in the SB Dunk continues to grow.

For collectors like Wallace, the changing box colors were always part of Nike SB’s appeal. “I think a lot of collectors like myself geek out over the smallest of details, like the branded lace bags and the woodgrain paper, so a different box color is actually something we get excited about,” he says. “Who doesn’t like seeing new colored stacks of boxes in their collection?”

For a bigger scoop of Nike, check the video below.

Author of Highsnobiety’s regular column “The Supreme Weekly,” Ross has been down with the NY crew since 1994 and has extensive knowledge of the brand’s influences and references.