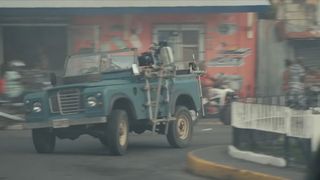 Filming on Bond 25 is well underway, and now we’ve been treated to the first official footage and imagery from the as-yet-untitled film. Check out a besuited Daniel Craig striding before a classic Aston Martin V8 in the Twitter post below, before watching additional footage in the video above.

007 star Daniel Craig, director Cary Fukunaga and the #Bond25 crew were out in the sunshine today shooting across a number of London locations, including Whitehall, where Daniel filmed a scene with a classic @astonmartin V8, first seen in a Bond film in THE LIVING DAYLIGHTS. pic.twitter.com/rhs13nNeyW

Daniel Craig and the @astonmartin V8 on location for #Bond25 pic.twitter.com/cPgfMSlUYm

The teaser video is set to a banging soundtrack of “Boom Shot Dis” by Kully B & Gussy G. The 60-second clip opens with a shot of a helicopter and seaplane flying against a golden sky. Throughout, we see stunning imagery from Jamaica of both the film and the behind-the-scenes work.

Scenes include Craig as James Bond stalking past a window with a speargun in hand and driving a jeep through town as locals look on, Jeffrey Wright (Westworld) as CIA agent Felix Leiter sitting in a nightclub, and new director Cary Fukunaga working his magic on set.

If this short video is anything to go by, Craig’s final jaunt as Bond might just be the best one. The movie is due in theaters on April 8, 2020.

‘Bond 25’ Finally Gets a Title and Release Date
MoviessponsoredAugust 21, 2019