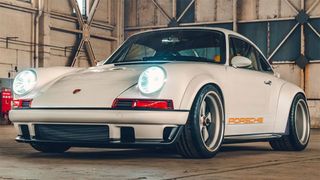 Porsche restorers at Singer Vehicle Design has partnered with racing firm Williams Advanced Engineering to elevate a classic white 1990 Porsche 911 with powerful enhancements, and created as a result of the company’s “Dynamics and Lightweighting Study.”

The project was commissioned by a Singer client who asked the company for something that is super fast, but also for it to be very lightweight. With that in mind, the bodywork was reconstructed from carbon fiber, and Williams worked on balancing the weight of the 911 by moving the engine forward slightly and relocating other components to the front trunk.

Singer Vehicle Design is proud to present the results of its Dynamics and Lightweighting Study (DLS) at the 2018 @fosgoodwood July 12-15. The unique and highly anticipated results will be part of both a static showcase outside Goodwood House and the Michelin Supercar Paddock Hillclimb Run. Our sincere thanks and appreciation go out to all of our partners in this project – @williamsadvancedengineering @michelin @michelinusa @recaroautomotive @momomotorsport @brembobrake @boschusa @hewlandengineering @danielsimondesign #singervehicledesign #DLS #singervehicledesignDLS #FOS #goodwoodfos #porsche #porsche911 #aircooled #handcrafted #everythingisimportant

The bespoke vehicle is also aerodynamically optimized, with a small air channel at the rear window designed to work with the ducktail spoiler and diffuser. The engine boasts two ram-air intakes integrated into the rear quarter windows, while a vent in the spoiler helps disperse air. Additionally, the engine is an air-cooled 4-liter flat six, that revs up to over 9,000 rpm and produces 500 bhp.

For the advanced aerodynamics of the Dynamics and Lightweighting Study, Singer Vehicle Design partnered with @williamsadvancedengineering with technical advice and consultancy from Norbert Singer. The result is that every surface of the car has been re-assessed through computational fluid dynamics (CFD) analysis. The changes include: • Elimination of front axle lift through redesign of front oil-cooler intake and venting, together with new front splitter • Optimization of one of the most iconic aerodynamic devices of the twentieth century – the ducktail spoiler. • Roof-channel and roof/rear window spoiler working with optimized ducktail and diffuser to generate downforce at rear • Optimization of engine intake and cooling performance through side-window ram-air intakes and rear deck-lid venting. #singervehicledesign #DLS #singervehicledesignDLS #williamsadvancedengineering #porsche #porsche911 #aero #aerodynamics #handcrafted #everythingisimportant

Furthermore, the suspension was optimized by Williams, boasting a bespoke six-speed manual transmission, and the interior has also been revamped with a black and yellow theme, highlighted by more carbon fiber for weight reduction, along with balsa wood inserts, gold accents, a raised gear lever and more.

This restored Porsche 911 made its debut at the Goodwood Festival of Speed this past weekend, and this DLS model reportedly costs north of $1.8 million USD.

Pharrell’s New $30 Million Miami Mansion Is a Major Level Up From His Last Place
DesignsponsoredApril 17, 2020