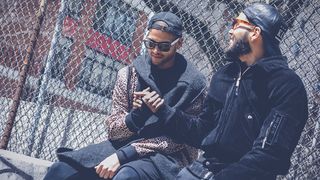 When someone mentions Ray-Ban, the first images that come to mind are often of the iconic musicians who made the brand’s sunglasses an irreplaceable part of their uniform: Bob Dylan, Ray Charles, the Blue Brothers, the list goes on. Now, the brand has revealed a new music-focused initiative reconnecting the brand with its deep-seated musical heritage: Ray-Ban Studios.

While today’s digital world offers more ways than ever to share one’s own creative projects, it’s become increasingly difficult to be heard amongst the noise. Ray-Ban Studios is a platform for artists to share their stories and spirit of individuality, a creative space celebrating newfound means of self-expression.

To launch the project, Ray-Ban has chosen Bronx-raised DJs The Martinez Brothers as its premier artists. Together with the iconic eyewear brand, The Martinez Brothers—Steven and Chris Martinez—have worked on an intimate and candid video that looks beyond the duo’s public persona and launched a limited edition, collaborative capsule collection.

The video launches as part of the Feel Your Beat series, a new campaign from Ray-Ban Studios that gets up close and personal with talented musicians, giving insight into their backgrounds, creative processes, and unique approaches to music. The Feel Your Beat series—a true expression of the brand’s connection to music culture—will continue throughout 2018 with new and exciting artists.

The product collaboration features two new takes on the classic Ray-Ban Wayfarer inspired by Steve and Chris Martinez’s times growing up in the Bronx, developing their sound on the New York dance scene, and playing memorable shows in Ibiza. Both pairs also feature the logo of the brothers’ label named Cuttin’ Headz.

In addition, Ray-Ban took the Ray-Ban Studios concept to two of Europe’s biggest summer festivals: All Points East in London and Primavera Sound in Barcelona. For this, the brand designed exclusive festival-ready sunglasses with oversized oval shaped lenses in a distinct lemon-wash.

Check out the first video in the ongoing Feel Your Beat series above and then shop the exclusive, limited edition sunglasses at ray-ban.com and Ray-Ban’s flagship stores.