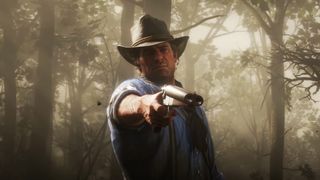 In the debut gameplay trailer for Red Dead Redemption 2, Rockstar gave us an introduction into the lawless frontier with a brief look at the weapons, NPC interaction, and various locations to travel to. With less than a month to go until its release, the renowned game company just dropped the second gameplay trailer showing off a variety of new actives to do, and how to customize Arthur Morgan.

Similar to the first game, the world is filled with side activities including gambling, hunting down lost treasure, random encounters, and more. RDR2 takes a step further, adding fishing, bank heists, robbing trains and houses, more in depth hunting, taking out gangs, character customization, and plenty others.

The world is what you make it in RDR2. Almost every choice you make will change how NPC’s will react to you. If you’re covered in blood and dirt, they will be scared of you. If you rob someone, they will remember and may seek revenge. Luckily, the “dead eye” skill is back granting players the chance to make many montage-worthy headshots when bounty hunters come shooting.

If you really want to experience the game from the ground level, Rockstar is adding a first person mode at launch, which a first for the series. Take on the gritty West up, close, and personal as you rob, shoot, and loot your way across RDR2.

Watch the second trailer above.