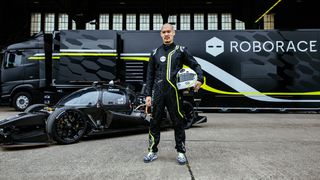 Did you ever hear the one about the fashion designer and the robot racing against the YouTuber and the other robot in electric supercars around a racetrack at a former airport in Berlin? It’s no joke. That actually happened in May — all part of the crazy world of Roborace, a company on the verge of launching the first-ever racing competition that teams up flesh-and-blood drivers with self-driving machines in a bid to record the fastest combined lap times.

The event, titled “Human + Machine,” took place at the Berlin edition of Formula E on the site of the former Tempelhof Airport, where the Berlin airlift took place during the Cold War. Roborace gave us a first look (albeit a lighthearted one) at what its futuristic race series might look like when competition begins in 2019.

Adding to the surreal nature of the affair, the fashion designer in question was ACRONYM‘s Errolson Hugh, who partnered with the self-driving Robocar against YouTuber Nick Andrew, aka AR12Gaming, and his robo-racer. The two men worked alongside scientists from the Technical University of Munich and the University of Pisa respectively in a friendly “time-attack” race.

Hugh, Andrew, and their robot teammates completed multiple laps, with the quickest lap by each recorded and averaged out to determine which team won. Watch the video above to check out what went down.

Hugh and Andrew were driving the so-called DevBot, a test vehicle capable of reaching speeds of 200mph. The other, cockpit-less racer on each side was the Robocar. Both were designed by Daniel Simon, who has created cars for Volkswagen, Audi, Bentley, and Bugatti, and has even designed vehicles for Hollywood movies such as Prometheus, Captain America, and Tron: Legacy.

As Highsnobiety readers will note, Hugh’s involvement and (spoiler) victory is unsurprising given his fascination with science fiction and all things technological. The aesthetic of his own brand, ACRONYM, envisions the clothing worn in dystopian high-tech societies. His soon-to-end partnership with Nike on its ACG line pushed the limits of acceptability so hard it spawned “the most hated sneaker of all time.”

“The whole idea of society being rebuilt based on surveillance and artificial intelligence is this big scary dystopian thing, but I was really interested in taking part because here are people that are actually involved in it,” Hugh told me in the lead-up to the race. “This is the real thing, and none of them seem particularly dystopian. They’re all super-nice.

“This is my first experience with a company that is attempting to use AI as a positive force, to do something that’s gonna benefit everybody. It’s fantastic.”

Hugh also touched on whether the experience would influence his future output with ACRONYM: “The DevBot is so interesting because it’s a test platform and it’s super-raw. It’s got this sort of very ACRONYM vibe to it because the material is exposed — it’s almost deconstructivist. You’re sitting in the car and you can see all of the parts, the switches, all of the elements that actually make it. They’re not hidden by anything, and if they are hidden, it’s by a piece of carbon fiber. It’s all so raw.”

Check out the race above and head over to Roborace for more information ahead of its launch next year.

Next up, go inside the extraordinary universe of Michèle Lamy.