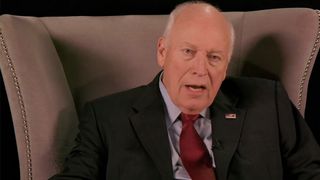 Part of Sacha Baron Cohen’s brilliance relied on the notion that in the early years no one was familiar with the outlandish characters he created like Ali G, Borat, and Bruno. Thus, he could land interviews with major forces in the world of politics, fashion, and business (he even pitched ice cream gloves to Donald Trump).

But thanks to movies which gave the feature treatment to all the aforementioned characters, people could no longer fall for his antics, so Cohen transitioned into more traditional roles in films like The Brothers Grimsby and Alice Through the Looking Glass.

A recently released trailer suggests Cohen is returning to his roots with a Showtime series titled Who is America that counts former Vice President Dick Cheney as its first guest (who he had autograph a waterboard).

Although the new character remains unseen, the text promises someone, “shameless, unhinged, and “cold-blooded.”

The first of seven episodes of Who is America premieres on Showtime on July 15 and “will explore the diverse individuals, from the infamous to the unknown across the political and cultural spectrum, who populate our unique nation.”

For more recommended viewing, check out the new Indian series, ‘Sacred Games’, which is at 100 percent on Rotten Tomatoes.

Kevin Bacon Books a Haunted Airbnb in Blumhouse’s ‘You Should Have Left’
MoviessponsoredJune 9, 2020

Not Everyone Is Impressed With Aaron Gordon’s Dwyane Wade Diss Track
LifestylesponsoredApril 29, 2020