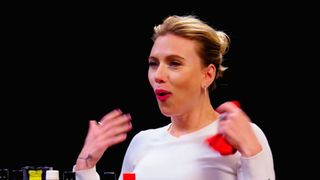 To kick it off, Johansson reveals that she’s actually a chicken wing connoisseur, and has traveled worldwide trying various iterations and even shared that hot wings and carbonated beverages are a “bad combo.”

While tackling the spicy challenge, she opens up about everything from her career, to talking about the best movie-set food (4:40), her favorite part of chicken wings (6:00), to learning about memes (8:34), trying to avoid spoiling Avengers: Endgame and more in the 26-minute video above.

In regards to Avengers: Endgame spoilers, host Sean Evans bombards Johansson with a variety of questions such as if Captain America will die (23:39), how Thanos would be defeated and more, while the actress struggles heavily from the last spicy chicken wing and expresses, “I honestly don’t know what those last three things you said.”

Enjoy the full segment and see how Johansson handled the various levels of the spicy wings challenge.