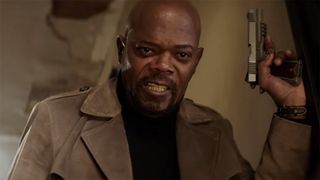 Warner Bros. Pictures shares a new Red Band trailer for Tim Story’s Shaft ahead of next week’s theatrical release. Starring Samuel L. Jackson as the titular character, the 2019 reboot ushers in the next chapter in the movie franchise featuring the baddest private eye in New York City.

This year’s Shaft finds John Shaft Jr., aka JJ, enlisting the help of his father to uncover the truth about the untimely death of his best friend. While largely absent during his son’s upbringing, John Shaft agrees to utilize his expertise to aid in JJ’s efforts to learn more about his friend’s passing and ultimately maneuver throughout Harlem’s heroin-infested underbelly.