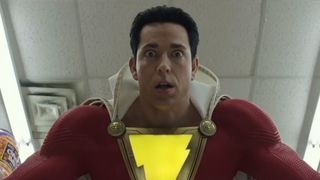 During San Diego Comic-Con 2018, DC shared a first look at its upcoming superhero flick, Shazam! The film, which is the seventh installment in the DCEU, follows 14-year-old Billy Batson as he grapples with his newly acquired superpowers.

Batson (Asher Angel) is an orphan who is taken into his seventh foster home. After warding off bullies at school, the teenager is greeted by a wizard called Shazam who chooses him as a host for his superpowers, but only if he utters his name. Upon doing so, Baston transforms into an adult-size figure (Zachary Levi) and attempts to work out what his strengths are. Going by the tongue-in-cheek trailer, he has plenty of fun in doing so.

Have a watch of the clip above before Shazam! hits theaters April 19, 2019.

Sponsored Story
Here’s What Went Down at Footaction’s No 1 Way Event in NYC
StylesponsoredDecember 23, 2019