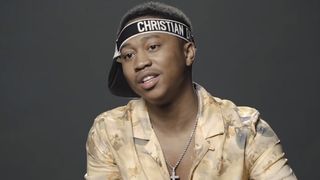 By now, you should already be well acquainted with Shiggy and his viral dance challenge that propelled Drake’s “In My Feelings” to number one on the Billboard Hot 100 chart. If not, you can now watch the man himself break down the infamous dance sensation.

In conversation with Genius, Shiggy, real name Shaquille Mitchell, speaks on his life as a self-described media influencer, and why Drake’s song caught his attention. “You get a couple of different vibes when you listen to that song,” he explains. “It’s got the New Orleans Bounce in it and the City Girls coming, and they from Miami. So its a whole bunch of energies that you get throughout the song.”

After posting his video, the likes of Odell Beckham Jr., Will Smith, Ciara, and others posted their own challenge, which of course, gave the challenge its viral start. As such, Shiggy sends his praises to all those that shared and copied, dropping a handy dance tutorial at the end. You know, just in case you want to try for yourself.

Check out the full breakdown above and be sure to catch Shiggy in Drake’s official video for “In My Feelings” below.

Joji’s New Track “Run” Has Twitter in Its Feelings
MusicsponsoredFebruary 6, 2020